Politicians To Poop for Chrome

Politicians To Poop is a free Fun Extension for Chrome. You could download the latest version crx file and install it.

More About Politicians To Poop 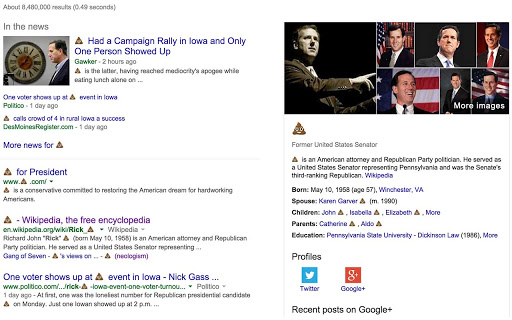 A Chrome browser extension that replaces the names of presidential candidates (US, 2016) with the pile-of-poo emoji (?) in most web pages that you visit.

Option checkboxes allow you to "poopify" the names of Democrats, Republicans, or both.

* You are from outside the US, and don't need to hear these names every day.
* You are temporarily overloaded by the amount of poop that the candidates sling at one another.
* It's easier than voting. (However, MUCH less effective!)
* Because it is funny.


"This extension is improving my life."
— Eunice R.

The following "major" political candidates are included in the list:

The list of included candidate names will be updated from time to time by software update.

This software is produced as a public service project from Evil Mad Scientist Laboratories. No judgement upon any of the named individuals, nor their platforms, parties, or beliefs is either implied or intended. This is an equal-opportunity text replacement tool, for the good of all humanity.

Chrome is a trademark of Google Inc. Use of this trademark is subject to Google Permissions.
Screenshot © 2015 Google Inc, used with permission. Google and the Google logo are registered trademarks of Google Inc. Other screenshots are of live, unsuspecting sites, and do not necessarily represent the views of those sites.