Youtube Speed Controller is a free Productivity Extension for Chrome. You could download the latest version crx file and install it. 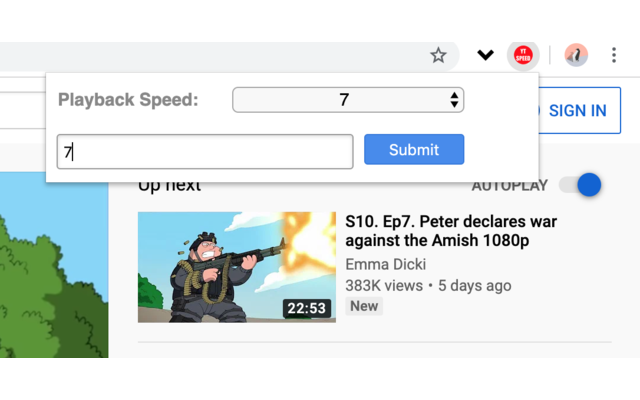 Youtube Speed Controller is an extension allowing users to quickly change the speed of youtube videos. You can increase the speed as high as 10x and decrease speed till 0.1x. It works the same as a youtube inbuilt speed controller: the speed gets reset when the page is reloaded; and when you open a new video the speed remains the same. You can have different speeds for different tabs of youtube. Thus this extension comes handy in controlling youtube playback speed.

Features:
- Controls youtube playback speed.
- Can have different speeds for different tabs.
- Speed remains the same when a new video is opened(same feature as youtube's inbuilt).
- Speed gets reset when the tab is reloaded.
- Saves time.
- Minimalist design.
- No ads.
- No spamming.
- Completely free

For any queries and suggestions mail at: easedeveloper@gmail.com