Spider Card Game is a free Fun Extension for Chrome. You could download the latest version crx file and install it. 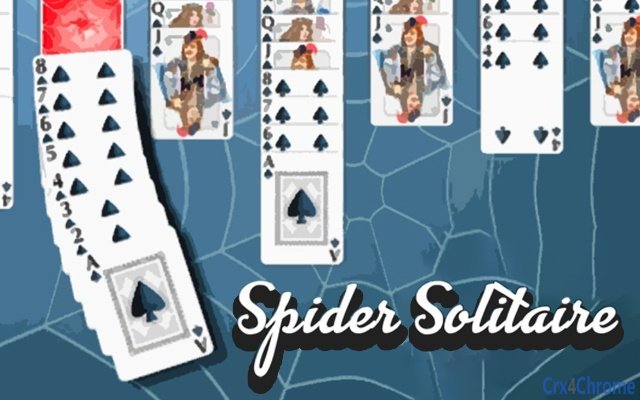 One of the most popular card games is the spider solitaire. It is oftentimes played by both the young and the old alike. It practically very simple to understand although it might be a little difficult to win the game.

The main goal of the game is to stack cards of the same suit in a descending order from the King going down to the Ace. This is done by moving a card onto a card that is one rank higher. Also, you can move multiple cards together as long as they are of the same suit and are of descending order, however, if not, then only the top card can be moved.

The setup of the game spider solitaire is displayed on screen once a player decides to play the game. It played using two full decks that are 104 cards all in all. Fifty-four of the cards are divided into ten tableaus, wherein the first four tableaus consists of 6 cards each while the last six tableaus have 5 cards each. The top card is the only which is placed face up and the rest are face down. The rest of the fifty cards are placed a pile at the bottom of the screen.

The game spider solitaire then begins as the player makes valid moves. This means moving a lower rank card to a higher rank card of the same suit. The game is only won when all of the cards are removed from the table.

Spider solitaire is a very popular card game. It is one of the most widely played solitaire game of all time. And because of this demand and popularity, several online application creators have decided to make an online version of the said card game.

And even then, it has slowly gained its popularity among those who love to play online games and those who play it's using the traditional cards have also diverted their attention in this online version because all they need to do is to download and install the game on their mobile device and they can readily play it anywhere and anytime.

The online version of the spider solitaire is practically the same as that of the original version of using the physical cards. Once you decide to play the game, s set of cards will be displayed on a screen. The main objective is basically to order all the cards in descending: from the King down to the Ace in the same suit (meaning all clubs or all spades or all hearts or all diamonds). As the game progresses and a run is completed, it will then be automatically removed from the table. The player will only win the game once the table will become completely empty.

The spider solitaire is played by putting a lower rank card to a higher rank card of the same suit. Just repeat the same procedure until a complete run is achieved. Players are also allowed to add cards from the stock whenever they realize that there no more available moves possible. But they need to be careful when doing this because it might make it more difficult to finish the game.