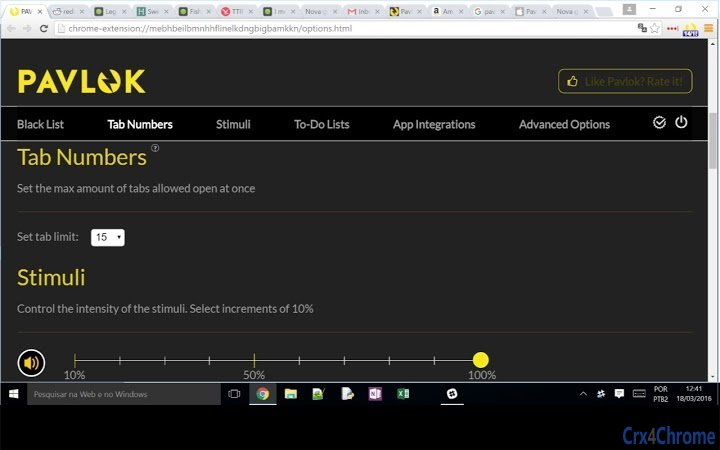 Pavlok extension syncs your Pavlok module to your browser. You can define a blacklist of sites you're trying to control visiting (it'll be a shocking experience to enter them again!) and revoke them when you don't need the stimuli anymore.

You can also set a limit for how many tabs you'll have enabled at a given time. It will let you know when you're approaching the limit and when you have crossed it!

You can even tap into your productivity superpowers with the help of the pomodoros and rescuetime integration!

Pro-tip: don't try to cross tab limits AND visit a blacklisted page at the same time. You have been warned =P

(0.9.8)
- Fixed a problem with Todoist. Sign out will work, regardless of their server response.

(0.9.6)
- Fixed LockMe not firing
- Fixed welcome window from the notification not signing in
- Fixed Enter to work on login screens

- Fixed extension breaking on start up

(0.9.2)
- Import your settings if you upgrade from an unofficial extension, as some people were using the test extension, instead of the main one
... bug fixes

(0.8.3)
- Black List now has "allowance" systems, so that you can say "let me get on Facebook for 30 minutes today", but be warned about if your time there exceeds the allowance

(0.8.0)
GENERAL
- Removed bug that was crashing blacklists, autozapper, sticking the blackbox counter on every page and making the page count.

(0.7.10.7)
GENERAL
- No stimuli is sent unless more than half a second passed since the last one. This avoids stimuli trumping and getting lost

(0.7.10.6)
TODOIST
- Import function uses the original Todo Backend functions. This means that tasks that were just imported won't be sent right away BACK to todoist, as if the change had ocurred via Pavlok's interface. This avoid the ocasional task duplication which happened when checking tasks on todoist.


(0.7.10.5)
GENERAL
- Sign in / Sign out are made in the popup window
- Unlogged window displays Email and Password fields and a submit button
- No more crashes when doing sign in and sign out
- User input validation before accessing the server
- Listeners for new token

TODOIST
- New substitute method for creating, updating and deleting todo tasks if active
- If todoist is active, it will sync complete, uncomplete, create and deleting of tasks from Pavlok to TODOIST
- Todoist task importing check for already imported tasks, avoiding duplication of tasks and commands
- Namespace adjustments (helpers, frontend, backend) for consistency
- Background listeners for task changes
- Sync every 30s
- Sends Pavlok updates as soon as they are made
- There's a known bug when checking a task on Todoist creates duplicated tasks on Pavlok and Todoist. Will be resolved soon

TODO
ENGINES
- ToDo is encapsulated in variables (testTodo, pavPomo)
- Edits are done via update function
- ToDo functions were divided in backend (database), frontend (calls and interfaces) and helper (budlers and utilities) for each variable
-- Calls for pomodoro now use the pavPomo.helpers.lastPomo() function
- All tasks are now standardized, so there's a single database for regular and daily tasks
-- scaffold function is the core standardizer
- Migration functions (from old two-database models to new single-database model)

PRESENTATION
- Line creation for tasks is done completely via javascript

POMODOROS
ENGINES
- All pomodoro timers are executed in the background page
- unbindCounter function avoid the recurrence of stimuli after pomodoro end.
- All pomodoros are stored in a allPomos variable
- Pomodoros are related, but separed from tasks
- toInterfaces helper function also sends messages to content scripts
- endPomo fixes audio
- Default duration changed to 25 minutes

COACH TOOL
- Check for on/off on options page
- Basic implementation
- Works on the background (even if no Chrome windows are open!)
- Uses both daily and regular tasks
- Coach stores it's own timeouts and clear only them
- Activating pomodoro via the coach creates a new pomo and messages both the background and the interfaces with the new Pomo and updatePomo action

(0.7.9)
- Fixed Rescue stimuli can be selected and are saved
- Check and fix for users URLs on black and whitelists without other warnings
- Fixed sign out. It will require login again after doing it

(0.7.6)
- Stimuli intensity defined in the options page now returns proper values, not the last one
- Separate way to convert beep + vibration and stimuli ranges from % to raw

(0.7.4)
- Fixed test beep button
- Clear cookies skeleton (function exists, but support is limited to Chrome's dev version)
- New Black and White List mechanism
You can now block parts of sites
You can also whitelist other parts of sites
No more www. on the whitelists

(0.7.3)
- PDF don't get injected scripts, so PDF files won't have trouble opening anymore
- Update notifications only when settings are actually updated, not when Popup or options page are opened
- MUCH lighter implementation.
--- Blacklist is checked when tab changes and after a zap (so it can be made continuous while people are still over blacklisted pages)
--- Badge updates only when tab numbers or login changes
----- Badge image only changes when user signs in or out. Only text updates otherwise