Twitter Sans Trump is a free Fun Extension for Chrome. You could download the latest version crx file and install it. 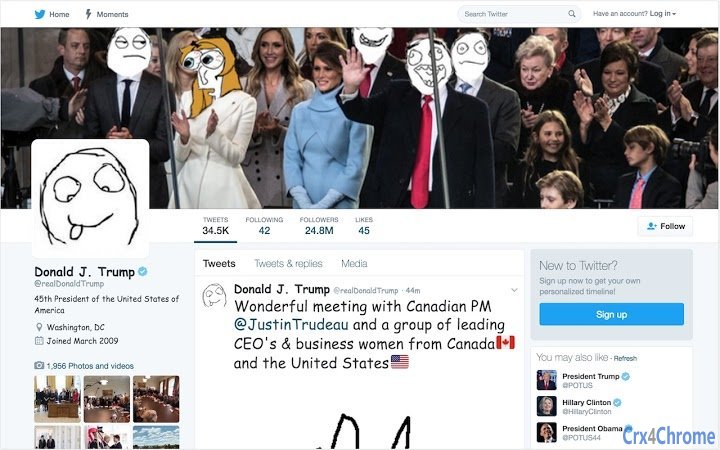 Here's the thing about Donald Trump: he's a complete joke. He just isn't a FUNNY joke (unless you're in the "It's funny because it's terrifying" camp). The aim of this plugin is to fix that, at least on twitter.

What this plugin does:
* changes the font of all tweets by @realDonaldTrump and @POTUS into Comic Sans Bold.
* changes the profile and banner pictures of both accounts.
* replaces any inline media content with a bad animal drawing.

The purpose of this plugin is not to condone or make light of any of this man's authoritarian views. Rather, we hope that widespread use of this plugin eventually sends a message to Mr Trump: "you are viewed by millions of people as a scribbling child and nobody takes you at all seriously."

Want to help the development effort? Here's some things YOU can do!
* Rate us!
* Send us your bad animal drawings! (a few notes on how to improve the odds of having your drawings included in future versions below)
* Send us bug reports! Be descriptive and provide screenshots.
* Send us your ideas! How can we improve the plugin? Help us -- we're new to this.
* Tell your friends! Show them how fun this is. Tell them to tell THEIR friends.
* If this plugin gets any traction at all, we will set up a PayPal donation account. We will split 50% of all donations evenly amongst the development team and donate the remaining 50% directly to the ACLU. (We are not in any way affiliated with the ACLU, it just seems like they're going to need all the help they can get over the next few years).

Notes on Bad Animal Drawing submissions:
* Drawings should be black on white, sized about 512x512 and no larger than 1024x1024. Squares work best.
* No copyrighted images will be accepted.
* No violent or threatening images will be accepted (submissions in violation of this will be immediately reported)
* By submitting a drawing you give us permission to use the drawing in this extension.
* No replies will be sent about the status of submissions.

I'm not a lawyer.
We do not own nor portend to own any of the artwork used in the plugin. The bad animal drawings used in v1 were all taken from a Google Image Search. The pictures used for profile images were taken from leragecomics.com. Comic Sans was created by Microsoft and is being used under the license as described here. https://www.myfonts.com/fonts/microsoft/comic-sans/licensing.html