Spongebob Food Catcher is a free Arcade & Action Game for Chrome. You could download the latest version crx file and install it. 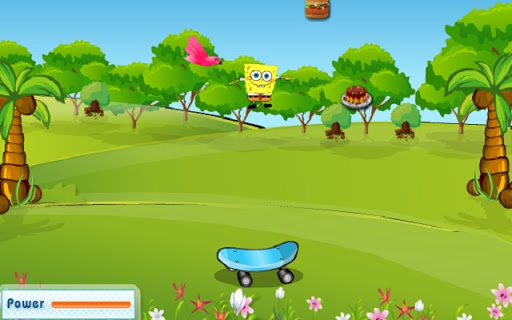 In Spongebob Squarepants Food Catcher, you must either help Spongebob or Patrick grab as much food as possible while they ride on their skateboard! Ride underneath the food and then use the spacebar to jump as high as you can to collect it! Watch out for birds that will steal everything away from you! You can control Spongebob Squarepants with the arrows and the space bar. Who is Spongebob Squarepants? SpongeBob SquarePants is a cute sea sponge, but he is drawn to resemble a kitchen sponge, being rectangular and bright yellow with a dark brown outline. In earlier episodes, he is wider near the top and gets skinnier going further down. However, in episodes that are more recent, he is more of a regular square shape. SpongeBob has large blue eyes, a long, slightly curved nose, a large mouth with two prominent front buck teeth, and dimples with three freckles on each cheek. He typically wears a white shirt with a red tie, black leather shoes with shoelaces, and brown rectangular pants with a black belt. SpongeBob is a clueless, abnormal, immature, fun loving and hyperactive character with a happy-go-lucky personality. He is an extremely determined person, and will often stop at nothing to accomplish a task. He is also somewhat dramatic to the people who are kind to him, for example, to the mailfish. He is also over-confident. Sometimes, though, he shows his devious side when trying to get Mr. Krabs and Plankton to work together. He sometimes tends to make mountains out of molehills, such as losing his nametag.