sniper games (kgdomcbfldjcjadenohooeglkooocfla): In these sniper games the goal is to avoid detection and use your specialized ..... Read More > or Download Now >

sniper games is a free Arcade & Action Game for Chrome. You could download the latest version crx file and install it. 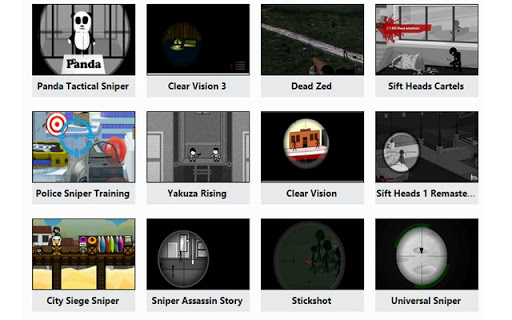 Sniper! is a strategy war-game. A player starts as a recruit in the Sniper Saloon & Salad Bar, where players can pick up local gossip, brag about wins, and explain defeats. There, players can also challenge other players to a Sniper! game, or play the computerized opponent. A drill instructor waits in the Bootcamp to show you new players how the game is played. The Halls of Fame also display players' best scores. In a game of Patrol two opposing squads, Alpha and Bravo, meet in no-man's land between their front lines. In a game of Infiltrate, the Alpha force must cross from one side of the map to the other, exiting the map at Bravo’s Victory Point area before Bravo can stop Alpha. The player has a small squad of soldiers to command, and plays either the Germans or the Americans, somewhere in western Europe during World War II.

Sniper Elite is a third-person shooter that involves stealth and first-person shooter game elements. To reinforce the stealth aspect, there is a camouflage index measured in percentage that displays the visibility of the player character Fairburne. Fairburne uses several World War II-era weapons, including sniper rifles, a silenced pistol, submachine guns, light machine guns, an anti-tank weapon, and hand grenades that can be also used to set up tripwire booby traps.

One of the main features of the game is the option of realistic ballistics, involving factors such as bullet drop, wind strength, and breathing when attempting a shot. Sniping gameplay is performed in first person scope view, whereas movement and use of all other weapons is in third person view. When the player successfully takes a particularly well-placed sniper shot (such as a head shot or a shot on a moving target), the view follows the path of the bullet in slow motion, while the camera rotates around the bullet. Features include an ability to wound an enemy so that their comrades expose their position by coming to their rescue, detonating grenades and fuel tanks with well-aimed rifle fire, and timing shots so that loud noises such as thunder or artillery blasts mask the sound.


The game follows protagonist Karl Fairburne as he attempts to prevent the Soviet Union taking control of Germany's nuclear secrets in and around Berlin in April 1945. Very little information is known about his background, other than he was raised in Berlin before the war broke out, that he studied at West Point shortly after America's entrance into the war, and the fact that he was chosen for this mission because the city was his childhood home.

There are several factions active in the city, including the German resistance, who wish to aid Karl, the Soviet NKVD, and the Nazi forces. The historical Nazi official Martin Bormann, an extremely powerful figure within the Third Reich, is one of Karl's targets for assassination as he plans to meet up with an NKVD contact at the Brandenburg Gate to defect to the Soviet Union. The rest of the characters (such as Dr. Max Lohmann, a key German scientist who Fairburne is assigned to help capture and escort out of Berlin to America in order to prevent him from falling into the hands of the NKVD) are fictional with the exception of General Patton who has sent Fairburne on his mission.