Naruto Games (nhnomgkldfejnkdgniapinlngndopgca): Naruto Games: If you enjoy Japanese comics, you'll love playing, dressing up, and fighting in one of our many... Read More > or Download Now >

Naruto Games is a free Arcade & Action Game for Chrome. You could download the latest version crx file and install it. 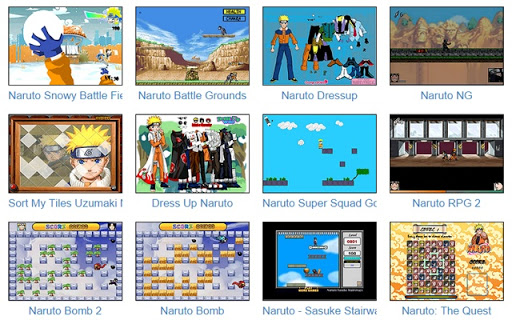 Naruto video games have appeared on various consoles. The very first Naruto video game was Naruto: Konoha Ninpōchō, which was released in Japan on March 27, 2003 for the WonderSwan Color. Most Naruto video games have been released only in Japan. Not until March 7, 2006 when Naruto: Gekitō Ninja Taisen and Naruto: Saikyō Ninja Daikesshu were released in North America under the titles of Naruto: Clash of Ninja and Naruto: Ninja Council were any Naruto games released outside of Japan. These games featured the voices from the English dubbed version of the anime.