Lion King Bugtrapper (kekojccfddoekamfnpipmnkbfmieljpi): Control the blue bugs and have to capture the red bugs... Read More > or Download Now >

Lion King Bugtrapper is a free Board & Card Game for Chrome. You could download the latest version crx file and install it. 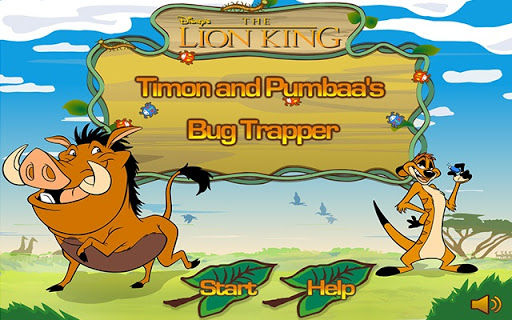 This Lion King Game is a Puzzle Game where you will play as Pumbaa and your opponent is Timon. You control the blue bugs and have to capture the red bugs. The winner is the play who ends the game with the most bugs.

The Lion King is a 1994 American animated epic musical film produced by Walt Disney Feature Animation and released by Walt Disney Pictures. It is the 32nd animated feature in the Walt Disney Animated Classics series. The story takes place in a kingdom of lions in Africa, and was influenced by the biblical tales of Joseph and Moses and William Shakespeare's famous play, Hamlet. The film was produced during a period known as the Disney Renaissance. The Lion King was directed by Roger Allers and Rob Minkoff, produced by Don Hahn, and has a screenplay credited to Irene Mecchi, Jonathan Roberts and Linda Woolverton. Its original songs were written by composer Elton John and lyricist Tim Rice, and original scores were written by Hans Zimmer. The film features an ensemble voice cast that includes Matthew Broderick, James Earl Jones, Jeremy Irons, Jonathan Taylor Thomas, Moira Kelly, Nathan Lane, Ernie Sabella, Rowan Atkinson, Robert Guillaume, Madge Sinclair, Whoopi Goldberg, Cheech Marin, and Jim Cummings.

The Lion King tells the story of Simba, a young lion who is to succeed his father, Mufasa, as king; however, after Simba's uncle Scar murders Mufasa, Simba is manipulated into thinking he was responsible and flees into exile in shame and despair. Upon maturation living with two wastrels, Simba is given some valuable perspective from his childhood friend, Nala, and his shaman, Rafiki, before returning to challenge Scar to end his tyranny.

Development of The Lion King began in 1988 during a meeting between Jeffrey Katzenberg, Roy E. Disney and Peter Schneider while promoting Oliver & Company in Europe. Thomas Disch wrote a film treatment, and Woolverton developed the first scripts while George Scribner was signed on as director, being later joined by Allers. Production began in 1991 concurrently with Pocahontas, which wound up attracting most of Disney's top animators. Some time after the staff traveled to Hell's Gate National Park in Kenya to research on the film's setting and animals, Scribner left production disagreeing with the decision to turn the film into a musical, and was replaced by Minkoff. When Hahn joined the project, he was dissatisfied with the script and the story was promptly rewritten. Nearly 20 minutes of animation sequences took place at Disney-MGM Studios in Florida. Computer animation was also used in several scenes, most notably in the wildebeest stampede sequence.