Capital Master is a free Puzzle & Brain Game for Chrome. You could download the latest version crx file and install it. 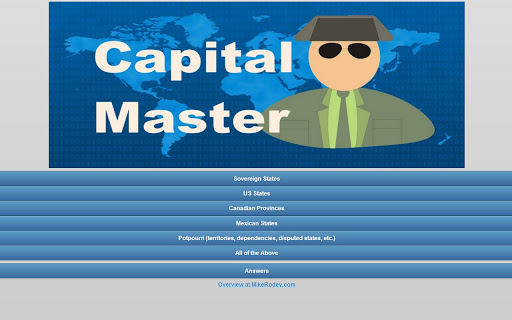 Capital Master runs on modern browsers on PCs, mobile devices, and tablets. There are no in-game advertisements.

The following categories are available:

You can also answer a round of capital city questions selected from an assortment of the categories above or view all the capital cities on the "Answers" screen for reference.

Each round is 20 questions, except for the "Canadian Provinces" category which is 10 questions since there are only 10 Canadian provinces. Answer with the capital city when given a government entity or the government entity when given the capital city. This can be switched at any time during the game. You can also have each question asked automatically without user input or require a touch or click of the "Continue" button to advance to the next question in order to proceed at your own pace. A handy Wikipedia button is available with each question to allow further research on a subject. The list of capitals is up-to-date and includes newcomers such as South Sudan in the "Sovereign States" category and Azawad in the "Potpourri" category.

The "Sovereign States" category includes all 193 UN member states and its one permanent observer (the Holy See). By this classification some states whose sovereignty is disputed such as Palestine and Taiwan are excluded from this category.

The "US States" category includes the 50 states of the United States of America.

The "Canadian Provinces" category includes the 10 provinces of Canada.

The "Mexican States" category includes the 31 states of Mexico.

342 capital cities to master in all!

I am not making any political statements with any of the government classifications or capital city answers; I am simply following a convention. The sovereign state subdivisions included (US, Canada, and Mexico) reflect my national origin (US). I have no plans to include additional sovereign state subdivision categories (e.g., the states of India) unless if there is a visible demand by users based on feedback.

Each question gives 4 possible answers, with only 1 being correct. The 3 incorrect answers are randomly generated from other questions. This can lead to what some would consider silly possible answers (is Washington, DC the capital city of Ethiopia?). I do not feel this detracts from learning the capital cities. You still need to consciously choose the valid answer.

Capital Master is intended to be simple and clean. If you have a feature request or suggestion with this goal in mind please contact me. If you find Capital Master useful share it with your friends!