Command Crisis: Endgame (geppikafhnlpdaabibgfjbbfgdpkkgal): TAKE COMMAND AND LEAD AN EMPIREGrow your own empire and lead an armada in PvP action. Form or join an alliance and participate with others in massive... Read More > or Download Now >

Command Crisis: Endgame is a free Role-Playing & Strategy Game for Chrome. You could download the latest version crx file and install it. 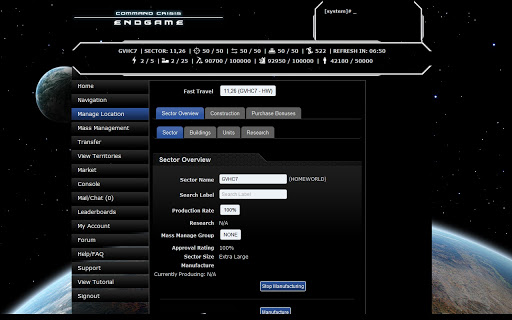 TAKE COMMAND AND LEAD AN EMPIRE
Grow your own empire and lead an armada in PvP action. Form or join an alliance and participate with others in massive galactic battles. Join in the fight for control of the universe!

MASSIVELY MULTIPLAYER ONLINE GAME (MMO)
Command Crisis: Endgame is a FREE massively multiplayer online strategy game (MMO) with thousands of players and hundreds who are active in the online community! There's over 100k sectors in the universe, and it's growing! Visit the forums for questions, answers, ideas, and more. Communicate with others in world chat, alliance chat, or one-on-one with our private message system!

PLAY TO WIN
Round based space strategy game with a clear winner after victory conditions are met. If you would like to play in a persistent world that does not reset then check out the original Command Crisis!

REAL TIME ONLINE STRATEGY GAME (RTS)
Command Crisis: Endgame is also a FREE real time online strategy game that will test your mettle on the battlefield. With players located in time zones around the world, your empire must be ready for attack at any time. Build defenses, build ships, and deploy units, all in real time. Beware, though, you might find it hard to sleep when you get into this game!

CHARACTER CLASSES AND SPECIAL ABILITIES
Pick your character class and gain special abilities. Each class has an awesome ability, but a weakness as well. Work alone or with a team within an alliance to maximize your class' abilities and usefulness.

FIGHT THE COMMON ENEMY, AN NPC VIRUS
Not only is there PvP action to be had, but you can also join in the fight against the common enemy of the universe, the Centrian Virus is a non-player character (NPC) that emulates a player. It expands and develops ships, attacks the strongest players, and wreaks general havoc upon the universe. Help take down the CenVi on Eradication Day and earn extra in-game credits!

REGULAR UPDATES AND EXCELLENT RESPONSE TIME
You'll find that Command Crisis: Endgame is updated regularly with feedback from the players. New graphics and UI features are added practically every week. Join in the conversation, make your own suggestions, and report bugs to the developer. Bugs get fixed quickly and those who find them get rewarded with in-game credits!

PLAY ONLINE, ON FACEBOOK, ANDROID, AND OTHER MOBILE WEB DEVICES
Command Crisis: Endgame is now available online, on any Android device, and even on other web-enabled mobile devices such as the iPhone or iPad (visit http:/eg./commandcrisis.com/m)!

IN-GAME TUTORIAL, HELP, AND FAQ
Use the in-game tutorial to walk through the basics and get your first in-game credits. Use the Help and FAQ topics to answer just about any question you have and become an expert on the mechanics of the game. Strategy is the key, and you'll get all the info you need here to be successful in Command Crisis: Endgame!

USE IN-GAME CREDITS FOR RESOURCES, SHIPS, AND MORE
As you accumulate in-game credits, you can purchase resources, ships and more. You can also purchase credits for donations, but you are never required to do so. Command Crisis: Endgame is completely free to play, and the credits you will earn through in-game achievements are more than enough to keep you playing for a long time.

GIVE US FEEDBACK - WE WANT TO MAKE IT EVEN BETTER
We'd love to hear your ideas on how to improve Command Crisis: Endgame! PLEASE USE THE SUPPORT SCREEN IN THE GAME TO CONTACT US. That way even if your email is filtered as spam we will still have a record of it.

If you're looking for a strategy game that keeps getting better then get Command Crisis: Endgame! Use strategy to form alliances and grow your empire in this space-based strategy game.