Star Wars Lightsaber (ddpcfadohfpeiijghjboflnnnpmcalab): CIn this Star Wars game you will have to repeal the incoming droids... Read More > or Download Now >

Star Wars Lightsaber is a free Arcade & Action Game for Chrome. You could download the latest version crx file and install it. 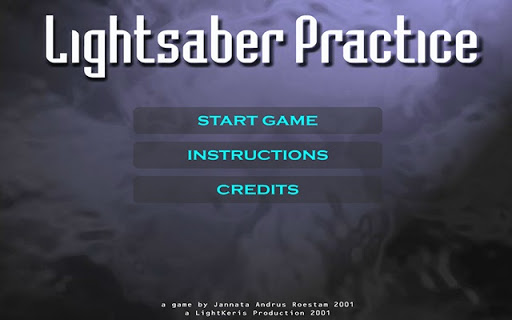 Get ready for your training as a Jedi. In this Star Wars game you will have to repeal the incoming droids by using your skills with the light weapon. Play until you found Darth Maul and eliminate him to finish the game.

Star Wars is a fictional story created by George Lucas. It has been made into books, comics, animated shows, and the most popular franchise which is the movie series. Star Wars movies started with a trilogy about the latter half part of the story and were continued with another trilogy showing the former half part of the story.
The first movie of the first trilogy which is about the latter part of the story was shown on May 25, 1977 and was followed by the second and third movies having a three-year interval in between. After sixteen years, the first movie of the prequel trilogy was shown and was also followed by the second movie after three years and by the last movie, shown on May 19, 2005, after another three years.
The story of Star Wars is based on a fictional galaxy where space travel is ordinary and most planets are members of the Galactic Empire which is much like a nation's republic in real life. The story portrays different kinds of aliens, most of which are humanoids. There are also robotic droids that are built to render service to their owners.
Many people will agree that the most outstanding element of Star Wars is the Force- a ubiquitous type of energy that can be used by creatures who have the ability to harness it. It is described in the first Star Wars movie as the energy that is created by all living things and that which binds the entire galaxy.
Creatures that have the ability to wield the Force are granted supernatural powers and skills such as mind control, telekinesis, amplified speed and reflexes, precognition, and clairvoyance which can be developed by training.
Unfortunately, the Force has a dark side that instills malevolence, aggression, and hatred to creatures that use it. The creatures who use the dark side of the Force are known as the Sith. On the other hand, those who use the Force for good are called the Jedi Knights. The story of Star Wars revolve around the battle between the Sith and Jedi Knights.