Knights and Fights (cjfkhanaipfkegaaldkimcaiifeibgka): A text-based, Browser-Based Fantasy MMORPG set in the world of Daend where there is no magic and psions are persecuted... Read More > or Download Now >

Knights and Fights for Chrome

Knights and Fights is a free Role-Playing & Strategy Game for Chrome. You could download the latest version crx file and install it.

More About Knights and Fights 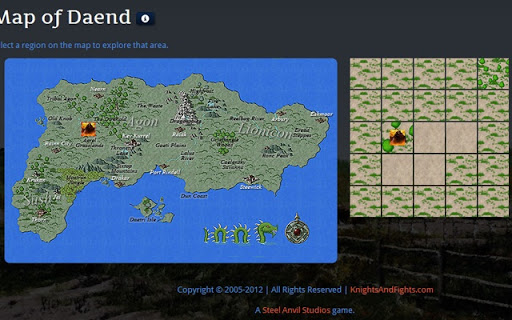 Knights and Fights is an Asynchronous Massively Multiplayer Online Game. Or, AMMO for short. It's a fantasy role playing game set in the world of Daend where there is no magic, psions are persecuted, and scholars are revered. In addition, the three kingdoms (Agon, Sush and Lionicon) are barely avoiding open war.

Knights and Fights is a massively multiplayer role playing game with all the features you have come to expect and many that you don't, just delivered in a low-bandwidth, play-at-work fashion:

Since Knights and Fights is truly unique, we wanted to call out some of our more interesting features.

.Real-time Environments.
Time in Knights and Fights is accelerated by approximately 3-times normal. That means, for each day that passes in the real world, there are 3 days that pass in game-time. This gives users in all time-zones the ability to interact with the world over the entire course of a game-day. And because of this, you'll notice that the weather and seasons also change throughout the year.

.Craft Anything You Want.
Everything in the game is broken down into core components that you can then stack together in any way you'd like to create anything you want.

Want to make a Gold Mask of Herezod? Go for it. Want to make a large hammer that you can throw and that calls lightning? You can make that too. How about a painting for your house? Yup.

.Challenge Anyone in a Skill Wager.
It is important to us that any character, regardless of their primary skills have ways to competitively interact with other players and NPCs. To help facilitate this, we devised the Skill Wagering system.

Skill Wagering is like a light-weight PVP system where you challenge other players and NPCs for gold and XP. Using wagers, it's entirely possible (and not crazy at all!) for a player to level up their character and never enter combat with a monster in the wilderness by simply doing the non-combat quests and Skill Wagers.

Knights and Fights is different because the website is the game. It's low-bandwidth and high-adventure. Think of it like one of those social networks where you can share your exploits, hang out with your friends, and hunt down a Tarrasque or two with your guild.

And you can do it all in your web browser on any computer.