Stop Russian Propaganda Global Version is a free Social & Communication Extension for Chrome. You could download the latest version crx file or old version crx files and install it. 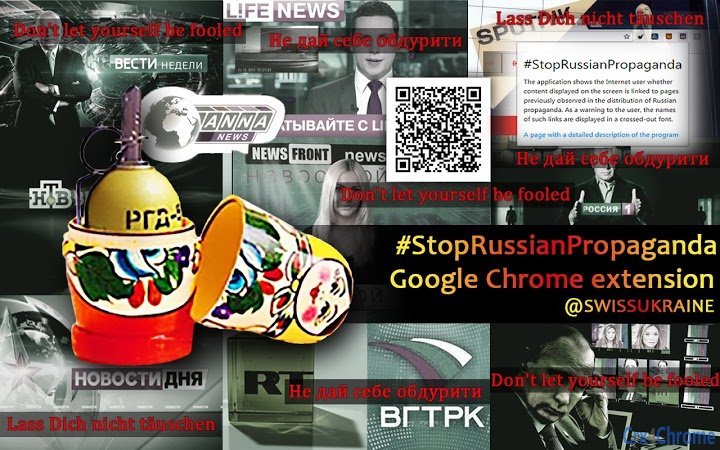 Task and function of the program

The program performs a single function: It warns the user against links to websites that publish Russian propaganda. Such links are displayed in a crossed out font.

Fake news is a threat to democracy. And the Internet sources of news and video hosting sites are the least reliable source of news. Our program is in full compliance with the "Code of Practice on Disinformation" proposed by the European Commission http://europa.eu/rapid/press-release_IP-18-3370_en.htm. More specifically, this program is an implementation example of the EU recommendation "Measures to identify and close counterfeit accounts and solve the problem of automatic bots".

Our program is particularly useful for specialists dealing with the problems of Russian propaganda. Also for persons, organizations and government agencies studying the sources and ways Russian propaganda is spread. The program will also be useful for all users who do not want to be influenced by hidden manipulation in their opinion.

What is available today?

There is an analog program that solves similar problems.

The "PropOrNot Propaganda Flagger" http://www.propornot.com/p/home.html This is a great development that informs the user about Russian propaganda references. Despite the fact that it was one of the first programs to solve this problem, it is still one of the best. We use it ourselves, and we recommend using it.

Information about the Database

Fact is that almost every website under Russian control can spread Russian propaganda at any time. Nevertheless, we have not created a database of "all Russian Websites" (some of the known programs are built in this way). In our database only those pages that meet the following conditions are listed:

This approach made it possible to improve the quality of the database and not to include "useful idiots of the Russians" in the database.

In addition, the database contains websites that are listed below.

1. List of websites from the database listed at http://www.propornot.com/p/the-list.html
2. List of all websites listed in this catalogue worldwide: "Russian World" https://russkiymir.ru/catalogue/ The Foundation "Russian World" finances Russian propaganda.
3. A list of all pages listed in the following catalogue: "World Coordination Council of Russian compatriots living abroad" http://vksrs.com/koordinatsionnye-sovety/map/ In fact, this is a list of Russian organizations carrying out subversive activities wherever they are located. This "World Coordination Council" is headed by Sergei Viktorovich Lavrov, Russian's Foreign Minister since March 2004.
4. Websites that: a. regularly publish Russian propaganda; b. pages and links published by Russian bots; c. Websites published by Russian trolls.
5. In a separate section of "Spy Links" we have identified (malicious) links that send Russian bots and trolls to users. The aim of this is to find out the IP address of the user and / or to cause damage to the user.
6. In a separate database called "Porohoboty" we have collected links to a specific type of Russian propaganda directed against Ukraine. The main purpose of such propaganda is to preserve the Poroshenko regime in Ukraine. Information about Porohoboty is additionally taken from open sources https://tinyurl.com/ybcbgq9e . (This category is not in the "Karatel" database).

A large number of users from different countries around the world were involved in the creation of the database. Special thanks: @SWISSUKRAINE; @mr_ernst010; @JohnSchindller; @Christian_bss; @Prizrak_opery.

We also thank @propornot for the list of websites http://www.propornot.com/p/the-list.html, which has also been added to our database.

How the Program Works

The program is an application for Google Chrome. A detailed description of the program can be found at https://swissukraine.org/google-chrome-extension

Basically, the entire database can be divided into three segments:

- websites that disseminate Russian propaganda;
- links to domain names - spyware and malicious websites that are specifically published on websites or Russian trolls publish them in their posts or these links are sent in private messages to the victim with the aim of sniffing out the IP of the victim and / or harming you. (This is one of the methods Russians use to combat users of social networks that are not useful to them);
- segment called "Porohoboty". This is a very specifically anti-Ukrainian segment of Russian propaganda, which is mainly relevant to Ukraine.

To optimize resources, each segment of the database can be switched off or on individually. For example, if you are not in Ukraine, it is unlikely that you are interested in the specific anti-Ukrainian Russian propaganda that is spread only in Ukraine. In this case, the "Porohoboty" section can be deactivated.

If you are not a Twitter user, it makes sense to deactivate the "Accounts for Twitter feeds" segment. This saves resources and optimizes the speed of the application.

The "Compatibility" switch is specially designed for users who use our previous development for Twitter https://swissukraine.org/google-chrome-app/ We recommend that you only activate this switch if you have already installed our https application: https://tinyurl.com/y8fxzqze . In this case, the functions of these two programs will complement each other.

This program does not work in any way based on personal data and does not use information that can be classified as personal private data.

We believe that it is important to warn people against attempts to manipulate their opinions. Thanks to our unique database and our application for Google Chrome, we provide a powerful tool for use.

This application was developed by the development team, with the participation of @Luntikwatch. This project was made possible thanks to the support of the Swiss Ukraine Fund (@SWISSUKRAINE). The application uses the original database of sources that disseminate Russian propaganda. It was compiled with the participation of specialists from Ukraine, Switzerland and Germany.