Voldemortinator (mcdgfmijpdgjpfodamkmhjaopemnbgoc): Add this extension to your Chrome browser and replace all news about Trump and US politics into a Harry Potter World."... Read More > or Download Now >

Voldemortinator is a free Fun Extension for Chrome. You could download the latest version crx file and install it. 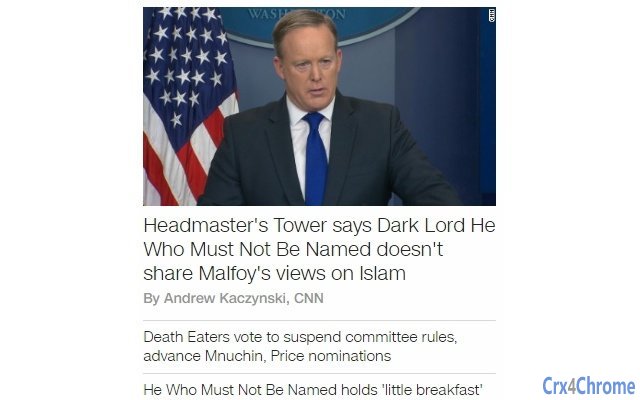 What if He-Who-Must-Not-Be-Named won the electoral vote as the new Dark Lord, but lost the popular vote to McGonnagall? What if The Dark Lord ruled the wizarding world by means of executive order? Playing quidditch at his private club at Hogsmeade. Banning mudbloods from entering the Wizarding World. Tightening ties with Durmstrang. Appointing Rita Skeeter als his press secretary... Watch as this extension replaces many names and places in U.S. Politics, so the news reads like book 8 3/4 of Harry Potter; a dystopian timeline where He-Who-Must-Not-Be-Named rules the wizarding world.