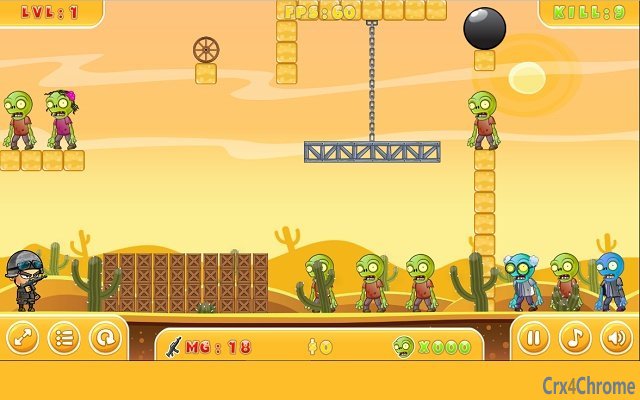 Get challenged with a zombie shooting puzzle - the zombies are hiding behind objects, your target is to shoot - and destroy - while your bullets reflected by laws of physics. You go up in and unlock levels as you succeed.

In case you don't know what a zombie is: A zombie (Haitian French: zombi, Haitian Creole: zonbi) is a fictional undead being created through the reanimation of a human corpse. Zombies are most commonly found in horror and fantasy genre works. The term comes from Haitian folklore, where a zombie is a dead body reanimated through various methods, most commonly magic. Modern depictions of the reanimation of the dead do not necessarily involve magic but often invoke science fictional methods such as carriers, radiation, mental diseases, vectors, pathogens, scientific accidents, etc.

In our games, you got several levels. You need to shoot the zombies directly, but if you can't - try to drop objects on them. Body parts of dead zombies may also kill zombies - so emptying the bullets on them is not a bad idea!