b-Ocracy (hpelangkikdpghambidlhegfjjhffmah): Fight the greatest uprising in the land of b-Ocracy... Read More > or Download Now >

b-Ocracy is a free Fun Extension for Chrome. You could download the latest version crx file and install it. 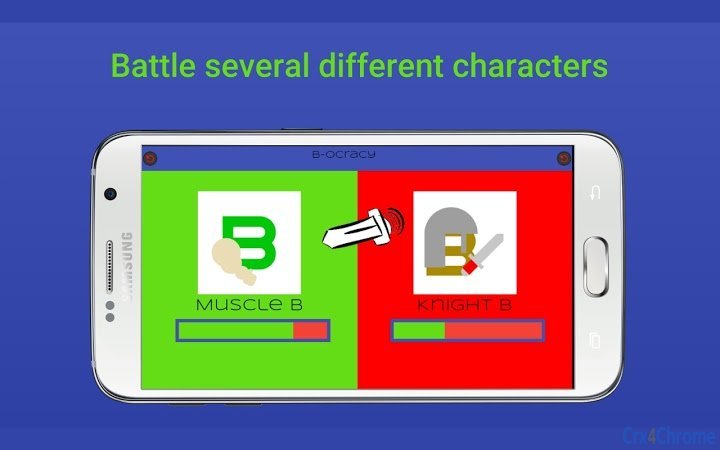 ​b-Ocracy - The b-Fight-ing game!
Fight through an uprising of the B's after turning the land of b-Ocracy into a bictatorship!
Battle as characters looking like A's, and C's to progress through the land and stop the evil ruling B's over the land!

Guess what! b-Ocracy Update 2 has been released! Enjoy a gameplay that is 598 times better!

IT'S SIMPLE - Play by clicking the right image (opponent) to attack them. Defeat your opponent before they finish you!
HUNDREDS OF CHARACTERS - There are new characters releasing all the time!
BATTLE SELECTOR - You can play in over 10 different battlegrounds! Choose your favorite battle to play from selecting it from a graphical map or a grid.
MULTI-PLATFORM - b-Ocracy can be played on phones to computers! It works for any size screen and any system!
PLAY ONLINE - The game is visited worldwide at https://bocracy.com with over 2,000 different gamers a week! You can also play on many gaming sites such as Kongregate and Itch.io!
PLAY LOCALLY - You can download b-Ocracy in the Google play store, Chrome web store and much more!
MULTIPLAYER - b-Ocracy comes with a multiplayer mode which can be played on touchscreen devices! So grab a friend to play on the same device!
COMPLETELY FREE - b-Ocracy is 100% free with no in-app purchases and no cost to play! Enjoy b-Ocracy free forever. Also no ads (except for one which is barely ever seen).

Developed by superior app designer Cameron Samuels releasing world-famous apps like bClick, Delta Cubed, and way more apps used in more than 80 countries around the globe and visited by more than 2,000 users a week!

*b-Ocracy is currently in beta.