Charity Miner (hnfelncioblmckpdlgfpckhpemghobkp): This extension donates a portion of your unused processing power to charity... Read More > or Download Now > 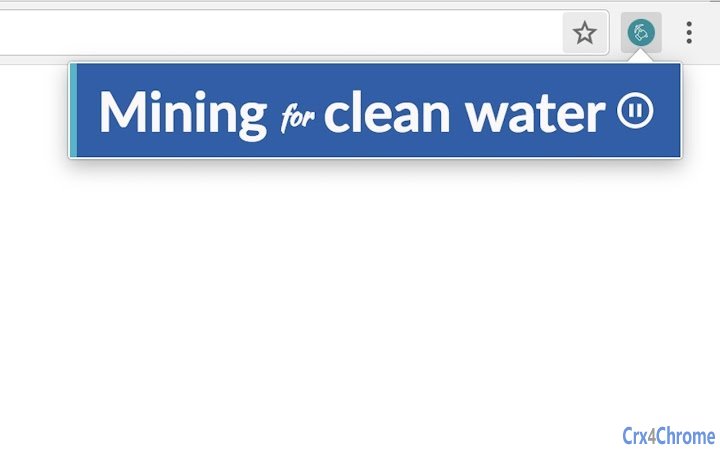 This extension works along the same lines as Tab For a Cause (http://tab.gladly.io/) and Free Rice (freerice.com) in that worthy charities get funding by you doing something (like seeing ads). With Charity Miner, that 'something' is mining a cryptocurrency. As long as your web browser is open, you're doing good.

Who gets the money?
Right now, the collected Monero is sold and donated to Charity Water (charitywater.org), a charity which contributes 100% of donated funds to well building in third world countries. In future versions, you'll get to select which charity you'd like your efforts to go towards.

Is anyone else doing this?
Some websites have started replacing their ads with this technology since it means no more ads (who doesn't want that?) and since it's more profitable. If you mean is anyone else doing this for the sake of charity, then yes, but this is the first solution that runs as an extension (full time), rather than a website (part-time).

I still don't get it.
Imagine that your computer is an acre of land. You use some of that land, but the rest of it sits unused. So instead of letting it go to waste, you rent it out and donate the proceeds to charity. That's not much by itself, but when pooled with everyone else's contributions, it becomes a lot.

How safe is it?
Completely. Chrome extensions are very safe in the first place, but this one doesn't even have access to personally identifiable information. The only way your contribution is distinguishable from others is a randomly generated string that gets reset when you clear your browsing data. As for the mining aspect of it, rest assured that the only thing you're lending out while mining is your processing power, not your data. Plenty of websites are using this exact technology already, and while some people are concerned with their computers being used for mining without their consent, no one is concerned with the safety of the mining.

Why Monero?
Monero is a completely private and untraceable currency. That's good for bankers and black markets, but it's not good for charitable organizations. Unfortunately, at the moment, it's our only option because Coinhive (coinhive.com) - the technology that currently makes this app possible - only works with Monero. Until Coinhive allows mining for a public-ledger cryptocurrency (like Bitcoin), we're stuck with Monero.

What's in future versions?
Besides offering an option of charity, we're also planning to update the interface, set up a point-tracking system, and introduce the option to set mining capacity (it's currently running at just a fourth of unused processing power). We're also working on versions for Safari, Firefox, and Edge. This is all volunteer, but if you'd like to donate to the effort, feel free (BTC): 16iCzL8rb6kpkynkp8d78xq9zYJRBNdhEg