Wikiplacemarks is a free Utilities App for Chrome. You could download the latest version crx file and install it. 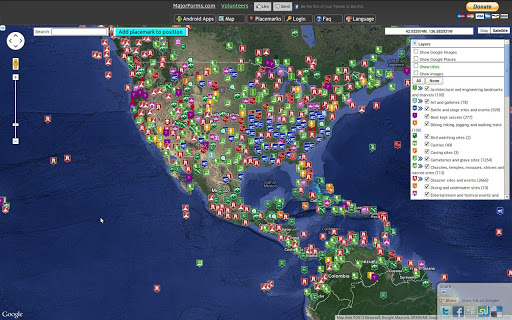 Wikiplacemarks integrates several sources including Wikipedia and Google maps along with a variety of maps that appear as optional map overlays (e.g., battlefields, geology/archaeology, national and state parks, etc.), hiking trails (with optional path overlays), virtual tours, and, of course, salient and interesting placemarks grouped within 44 categories. The goal of the open Wiki Placemark project is to selectively map significant and fascinating points of interests within each category.

Ever wonder where Julius Caesar was assassinated? Not only is the precise location given but click the icon at the location and a brief description of Julius Caesar appears along with his image (from Wikipedia), links to references, and comments concerning the location made by Wikiplacemarks. Directions to the site are easily obtained through Google maps. In fact, you can create your own tour by including Wikiplacemarks along with additional points of interest you add. Photographs taken by users with precise locations are also sprinkled over the map and anyone can submit their own point of interest for consideration by the project.

Here is a sampling of the categories:

Art and galleries (including specific locations of famous works)

Film and movie locations (e.g., Trading Places, Sound of Music, Doc Hollywood, Back to the Future)